I headed out to John’s Salvage just south of Seguin Texas in search of a useable Corvair engine that I could rebuild into an experimental aircraft engine. 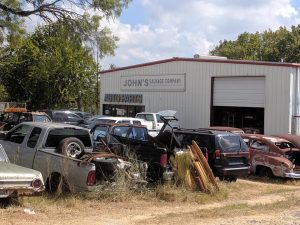 I had called John, and he’d said that he had about 30 Corvairs left that still had engines. However he added that all the engines that you’d stick in airplanes were gone. “All of them?” I asked. “Yes, all of them.”
I didn’t let his assessment put me off. 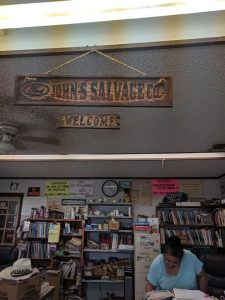 And so with serial numbers in hand from my newly acquired 2014 William Wynne Corvair Conversion Manual, I headed out to John’s, a twenty minute drive.

There are 5000 vehicles at John’s Salvage. Piled high. They sent me out back (“turn left at the third oak”) where I was told I would find Corvairs. I couldn’t find any. Finally I asked some random if he’d seen any Corvairs. “Sure,” he says, pointing. “There’s one right there.”

I had walked right past it.

I poked around and found more: A bunch of rusted Corvair car bodies stacked on top of each other in heaps, snarled grape vines, small trees and brush almost completely blocking access. Sadly, I’d left my machete at home.

After about 45 minutes of using engine degreaser and a brush on multiple engines, sweating profusely and scratched all to hell from the mesquite thorns, I finally scrubbed away some dirt and scum to see letters I was looking for, stamped in the shiny metal of the case, just behind the oil filler tube — a serial number ending with a letter combo that meant, in brief, “a good engine for conversion”.

To know what to look for, I strongly recommend getting the manual; some serial numbers indicate cores that are “good to rebuild into flight engines”, others not. There are caveats and complexities. Go to the authority, William Wynne. Also helpful is to get his disassembly DVD. I did that in 2007 when I disassembled my first engine, and it was well worth it. The engine was seized, but with the manual and DVD I had persevered and prevailed. 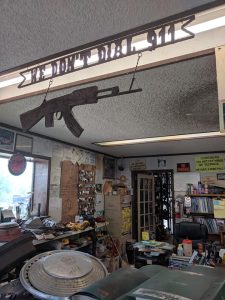 There was no way for me to remove the engine in the moment, I lacked the tools and the time; furthermore the car it was in was trapped between multiple other vehicles, had a truck frame on top of it, and was only accessible through a narrow maze of 1 foot wide foot paths. The engine weighs more than 230 pounds with all the gizmos and sheet metal attached.

Filthy and a bit bloody, I walked back up to the office, conferred with John for a while, and decided to let them pull the engine out for me. It would cost maybe a little more, but during the week I was writing code for Dell and didn’t have time to go pull an engine from a dead Corvair.