I’d lived less than 15 minutes from Old Kingsbury Aerodrome for nine years before I dropped by with my daughter. Earlier that day I’d found a Corvair engine I was going to convert to drive the CH 750 I wanted to build.

85TE, as it’s identified on navigation charts and with the FAA, has a 2600 foot long grass runway, one I thought was not in service any longer, except for radio controlled airplanes that the Aerodrome was used for.

We drove up and I parked in some shade cast by a post oak. The big hangar that served as the museum display hall was empty save for an airframe up for sale, a WW1 era tank, and the fuselage of a scout aircraft that looked like the kind used in Vietnam by forward air controllers — but I think it was much older than that. 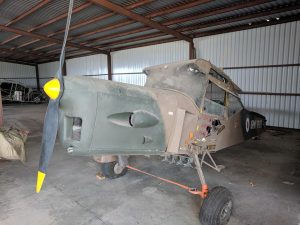 When we walked into the hanger where the Pioneer Flight Museum office was, a lanky fellow emerged from behind a number of wings being prepared to have fabric applied. He introduced himself as Steve. We talked a bit, and he asked if I was a pilot, and what I was interested in flying. “A CH 750, but I have build it first,” I said. “Also I found myself a Corvair engine today to rebuild.”

“William Wynne built the motor. But I acquired it from the guy he built it for.”

Steve had about 20 hours on his Corvair. He showed us around the hanger which was being used to house some wonderful WW1 aircraft, all under construction: An SE5A replica, a Rearwin 2000C “Ken-Royce”, and some original and replica Bristol Fighters.

Then we moseyed over to another hanger, where they had a Canuck, a Piper J-3 Cub, and a Thomas-Morse Scout. What wasn’t on hand was the Fokker Dr.I Triplane.

It was incredible and I was a bit disappointed in myself, an aspiring homebuilder, to have never taken the time to come over and visit before. We came out of the hanger and we talked about the strip. There was a short runway for the RC aircraft, the then the longer one. Planes using 85TE are to circle the field at 1000 ft AGL waiting for RC aircraft to land.

“We had an incident today,” Steve said calmly. Then he pointed down at the south end of the runway.

I saw there a crumpled silver wing and a broken up tangle below it. The area around the plane was surrounded by yellow “Do Not Cross” tape. At that very moment, an FAA inspector was investigating the crash, though he wasn’t in sight.

“The pilot?” I asked cautiously. Steve seemed to draw in his breath a little. “He’s alive, at the hospital. He’s got some broken bones. But he’s alive.”

The plane was a really beautiful Pietenpol Sky Scout that had been attached to the museum. It had a model A engine in it, and on a south takeoff, during the initial climb out, the engine had stopped. The pilot had already begun turning east from the runway. He did his best and brought it down still generally on the field, but unfortunately there was a clump of trees that he wound up hitting. No fire had started. An ambulance had taken him to the hospital in Seguin.

I gazed at the wreckage, which was a couple hundred yards away. I was briefly tempted to go get a better look. “Papa,” my daughter asked, “you’re not going to crash like that, are you?”

We walked in silence back up to the main office hanger, and I said goodbye to Steve. I knew I’d be going there again to volunteer with plane construction. How could I not? It would be some time before I would buy my plans from Zenith for the CH750. I could use some aircraft construction training. In the car my daughter said “Hey, let’s time how long it takes us to get home!” She was already over it — my assurance that I wouldn’t crash was good enough for her.